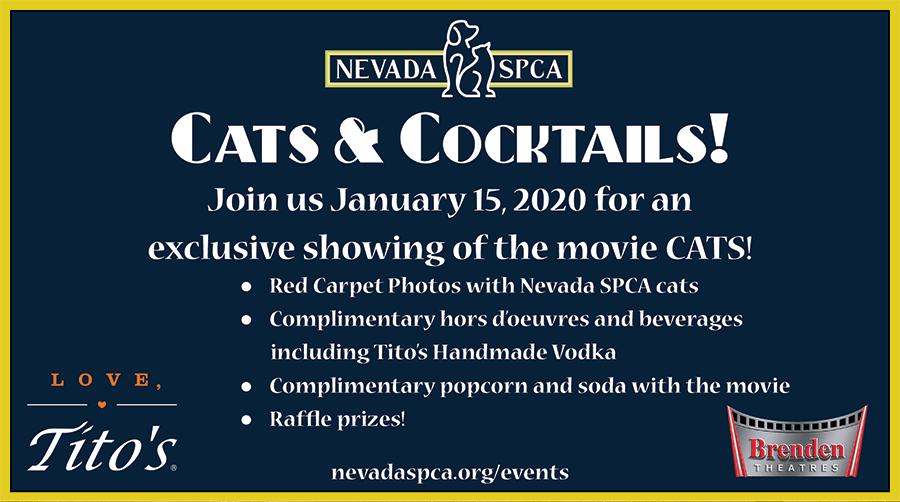 Meow! Join us on Wednesday, January 15th for CATS & Cocktails: an exclusive evening of mixing, mingling, and movie viewing…all to raise money for the shelter pets at Nevada SPCA.
The evening begins at 7 p.m. at Brenden Theatres inside the Palms Casino Resort. Enjoy cocktails and delectable passed hors d’oeuvres and meet some of our adorable adoptable kitties before grabbing your complimentary movie popcorn and soda and stepping into the theatre for CATS the movie at 8:30 p.m.
Cocktail and passed hors d’oeuvres: 7:00 p.m. – 8:15 p.m.
CATS movie: 8:30 p.m. (movie run time 1 hr 49 mins)
Tickets are $30
Purchase Tickets Now
About CATS:
Oscar®-winning director Tom Hooper (The King’s Speech, Les Misérables, The Danish Girl) transforms Andrew Lloyd Webber’s record-shattering stage musical into a breakthrough cinematic event.
Cats stars James Corden, Judi Dench, Jason Derulo, Idris Elba, Jennifer Hudson, Ian McKellen, Taylor Swift, Rebel Wilson and introduces Royal Ballet principal dancer Francesca Hayward in her feature film debut.
Featuring Andrew Lloyd Webber’s iconic music and a world-class cast of dancers under the guidance of Tony-winning choreographer Andy Blankenbuehler (Hamilton, In the Heights), the film reimagines the musical for a new generation with spectacular production design, state-of-the-art technology, and dance styles ranging from classical ballet to contemporary, hip-hop to jazz, street dance to tap.
One of the longest-running shows in West End and Broadway history, the stage musical “Cats” received its world premiere at the New London Theatre in 1981, where it played for 21 years and earned the Olivier and Evening Standard Awards for Best Musical. In 1983, the Broadway production became the recipient of seven Tony Awards, including Best Musical, and ran for an extraordinary 18 years. Since opening in London in 1981, “Cats” has continuously appeared on stage around the globe, to date having played to 81 million people in more than fifty countries and in nineteen languages. It is one of the most successful musicals of all time.
+ Google Calendar+ iCal Export

Your Gift, Save Lives.

Thank you for your interest in adopting a pet in need of a home. You're one step closer to gaining a new family member that you can love and spoil.